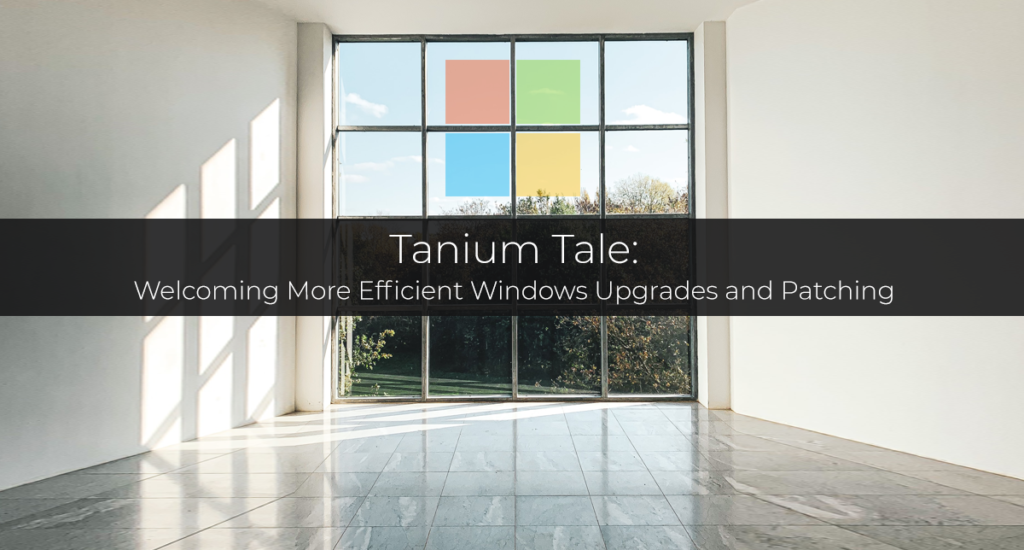 When a global $13b business protecting the most critical information assets of thousands of customers sought to take greater control over its Windows workstation environment for 13,000 employees, it turned to Tanium.

When Tanium sought to engage the best partner to enable its customer’s long-term success with the platform, it tapped Chuco. We’ll take a closer look at some of the highlights of that collaboration over the past year.

Slipping Through the Closing Window on Microsoft Windows 7

After standing up Tanium Server and key modules (Patch, Deploy, Discover and Asset), Chuco had rolled out clients across the organization’s server (6,500 Windows and 3,500 Linux) and workstation infrastructure.

Chuco then turned to address one of this business’s most critical challenges — efficiently upgrading upwards of 8,000 workstations from Windows 7 to Windows 10.

With support ended in early 2020, and Microsoft only offering limited security updates through a costly Extended Security Update (ESU) program, continued use of Windows 7 presented intolerable levels of risk and expense. In addition to the cost of support and the security exposure presented by continued use of Windows 7, there was also considerable risk in managing the dependencies of specialized applications running on those systems, as those tools halted their own support for that retired operating system.

This dynamic created uncertainty, pain and inefficiency for the IT teams responsible for supporting an increasingly complex technical landscape, as well as the end users relying on critical applications running on out-of-date Windows 7.

However, updating thousands of machines to Windows 10 posed its own set of serious risks and potential costs. The project could not be undertaken lightly.

Many “Panes” Make for Greater Risk and More Pain

A massive upgrade process in this scenario is complex. Even basic steps like distributing operating system update files (e.g. ISO images) and managing the bandwidth to distribute them present significant challenges. In this case, the organization had a global presence, including offices situated in remote locations with multiple machines served by tightly limited bandwidth.

That global footprint presented a number of cascading constraints. When configuring upgrades, managing languages, language packs and associated dependencies can be overwhelming. Consider that locations have systems with the “expected” localized version of Windows for that geography. Now consider scenarios in which users further customize their own machines — or shared accounts on the same machines — with language packs that are not standard to that geography.

For example, one would expect Canadian users to expect an integrated option for French in Windows 10. And Microsoft does just this in its OS configuration. What’s less expected is a scenario in which an individual who prefers to work in French Windows is based geographically in China and installs a one-off language pack to parlez-vous français on their particular workstation. Or, making things even more interesting, on a workstation shared by several accounts and individuals.

This scenario represents just one “known unknown” in terms of system configuration details that have to be mapped, identified and accounted for in any upgrade plan.

“This scenario represents just one “known unknown” in terms of system configuration details that have to be mapped, identified and accounted for in any upgrade plan.”

The same principle applies at the application layer. In this client’s environment, machines often supported mission-critical applications – such as scanning software vital to information management — that would not work on Windows 10 “as is.” Either those were out-of-support legacy tools themselves, or they would require additional upgrades to work on a more modern operating system. Again, this required another map of potential pitfalls to develop and plan for as part of an upgrade program.

Adding a further twist, one of the applications this client used on many machines was a third-party disk encryption solution. The net implication for those systems would be that absent an automation solution, someone would have to physically enter decryption keys any time the system was rebooted. And reboots tend to be part of any Windows OS update activity…

All taken together, facing a plethora of problems to navigate, one can see why it would make sense to maintain a Windows 7 status quo as long as possible. If everything went right in the transition, without absolutely no surprises or disruptions, the net change in experience for end users would be the status quo (with a new UI to get used to).

But by engaging Chuco and taking advantage of our extensive experience executing complex Tanium projects, this organization was able to set sights on and reach a new vista swiftly and smoothly.

“All taken together, facing a plethora of problems to navigate, one can see why it would make sense to maintain a Windows 7 status quo as long as possible. If everything went right in the transition, without absolutely no surprises or disruptions, the net change in experience for end users would be the status quo (with a new UI to get used to).”

Given the complexity of this client’s environment, Chuco took full advantage of the broad range of tools and capabilities Tanium provides, adding our own innovations and enhancements along the way.

Core to our success was establishing comprehensive visibility across workstations and their configurations, and working iteratively in waves to group and update those systems. Tanium gave us the power to effectively use available bandwidth for ISO distribution, and to configure upgrades mapped to the OS-level language and add-on language pack requirements of each system. The same held true for application-level updates that these system upgrades necessitated, though sometimes with some system-level manual intervention.

By grouping systems, we were able to check our work, resolve any issues, learn some technical lessons, and make some exciting discoveries along the way to accelerate our progress.

Depending on the nature of the systems and the updates at hand, Chuco would work with the client to update as many as 1,000 systems at a time. Because of the significant shift from Windows 7 to Windows 10, we took care to communicate clearly with end users. That included multiple email notifications that included escalation paths for them to raise issues or ask questions. We also took advantage of Tanium’s ability to present users with a system-level “pop-up” and ability to defer their scheduled upgrade for two days.

As we brought more systems live on Windows 10, we also worked with the client to push Windows 10 updates as well, as those became available (e.g. version 1909, version 2004, version 21H1). In many instances, these updates could be executed in a way that was completely transparent to end users.

As expected, this scale of project wasn’t “push button” — but it was one we were able to plan and execute within the client’s time and on budget constraints.

“All taken together, facing a plethora of problems to navigate, one can see why it would make sense to maintain a Windows 7 status quo as long as possible.

“If everything went right in the transition, without absolutely no surprises or disruptions, the net change in experience for end users would be the status quo (with a new UI to get used to).”

If you’d like to learn more about how we work with organizations to swiftly and smoothly execute Windows upgrade/update projects with Tanium, we’d love to connect. Our team of seasons, certified Tanium experts has deep, hands-on experience in this domain. We’ve developed an extensive understanding of the product, its capabilities, and best practices for achieving the objectives that matter most to our clients. 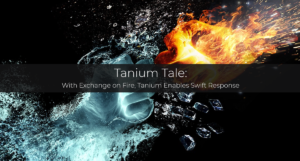 As details on Microsoft Exchange vulnerabilities affecting thousands of organizations emerged, with aggressive attacks spiking this month… Chuco worked with one client to use its existing Tanium system to quickly identify and fix Exchange issues they didn’t even realize they had. 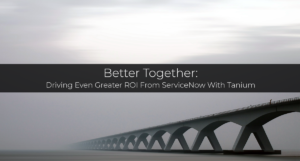 Better Together — Driving Even Greater ROI from ServiceNow with Tanium

The benefits of integrating ServiceNow with Tanium are so clear, we can’t think of a reason you wouldn’t want to do it. Through integration, workflows created in ServiceNow can access accurate, real-time endpoint data from Tanium — regardless of whether the endpoints are physical, virtual, cloud-based, or in the IoT. Better information means more efficient and more effective automation. 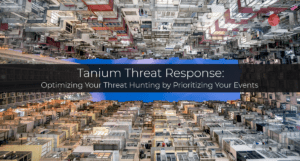 Alert fatigue is a well known problem in cybersecurity. Many organizations are flooded with so many security notifications, they are at significant risk of missing actual threats. Tanium Threat Response gives organization threat hunting, security operations, and incident response teams the deep visibility to surface valuable security endpoint data and telemetry. 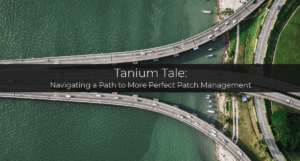 When a $30 billion dollar transportation company with 10,000 endpoints and hundreds of servers adopted Tanium, they realized that improving their patching capabilities, efficiency and overall compliance levels could have a significant impact on their ROI. Tanium introduced them to Chuco, and we got moving — fast. 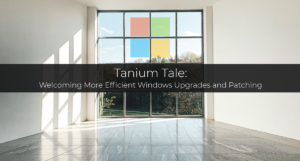 Navigating upgrades from Windows 7 / 8 / 10? Read more about how Chuco helped a $13 billion information management business upgrade 8,000+ workstations to Windows 10 using Tanium. Chuco can apply the same approach and processes to assist with large-scale migrations to Windows11. Contact us to discuss how we can help plan and execute complex updates and patches to secure your endpoint systems. 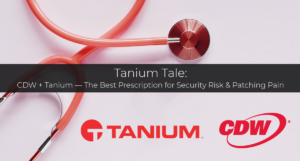 See how CDW connected its customer, non-profit medical provider with 250 international locations and 90,000 endpoints, with Tanium and Chuco to tackle #endpointsecurity, #patchmanagement, and #windows10 updates. With a single solution for Converged Endpoint Management (XEM), our client identify 46 million security vulnerabilities, eliminating 90% of priority issues within six months. Read more below. 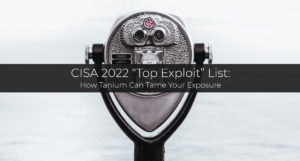 The Cybersecurity and Infrastructure Security Agency (CISA) has just published its annual list of the most commonly exploited vulnerabilities for 2021. This article shares thoughts, advice, and practical steps to manage your endpoints using Tanium. 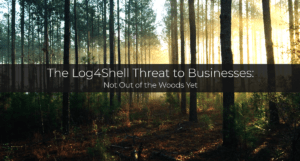 The FTC means business when it comes to pushing organizations to patch Log4j promptly. Even if you’ve taken the initial steps to patch your systems, the problem is that Log4Shell is not your typical vulnerability. Log4j is not software from a single vendor. Read more about the Tanium advantage in surfacing and remediating Log4Shell.